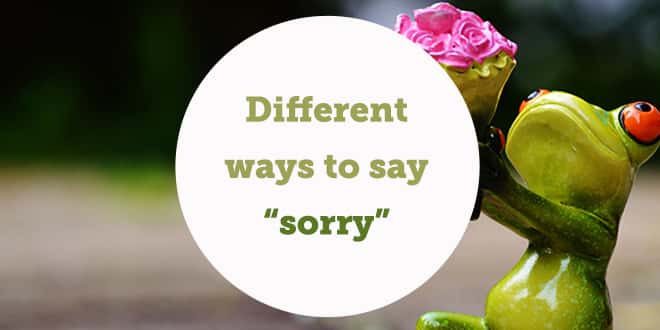 Most languages are usually rich in synonyms of certain words and English is no exception to that general idea.  With the language having more than one million words, there are plenty of others ways to express the word “sorry” and today we are going to look at few of them and what situations they would tend to be used in. Obviously we are not going to repeat “sorry” as we already know that one.

Saying sorry has never been so easy thanks to @ABAEnglish

I apologise for arriving at the meeting later than planned.

The verb “to apologise” is very much a more formal way of saying sorry and will often be heard in formal situations such as those which arise in a work related environment. In addition to a work related environment, this is also common for companies to say to their customers if their customers have been wrongly mistreated or have been inconvenienced for whatever reason.

I owe you an apology

Like the previous example where the verb apologise is conjugated, here we are using the noun with the verb to owe. While appearing formal, this can actually be used between friends who have fallen out for a specific reason and one is accepting that they were in the wrong and is trying to make it right.

I hope you can forgive my actions

I hope you can forgive my actions. I was in a bad place and made some very silly choices.

When we speak about forgiveness and use the verb forgive, it implies that there is a very personal element to the apology. In other words, we would normally not ask our boss for forgiveness if we hand in a project 2 days later than the planned date but instead ask a family member to forgive our actions as there is a more intimate or close relationship or bond there that we really do not want to be broken.

That was my bad!

“Who left the toilet seat up?”

“That was my bad”

When we use “my bad” as a way to say sorry, we would only ever use this when speaking to our friends as this is a very colloquial way of saying sorry. Even a child would never say “my bad” to their parent as it almost seems disrespectful to a parent but not to your friend.

What’s the best way to say sorry then for variety?

The most important thing to clarify is that sorry works in all situations so if all else fails then you know you can use that but if you would like to vary your vocabulary then it is recommended that you only use the other options in the contexts that have been explained or are very similar. Using the others in the wrong context- especially the colloquial “my bad” may give off the wrong impression.

If you’d like to continue learning English, choose ABA! It’s free to sign up and you will be able to access all our grammar video classes and the first complete unit of every level from the very beginning.