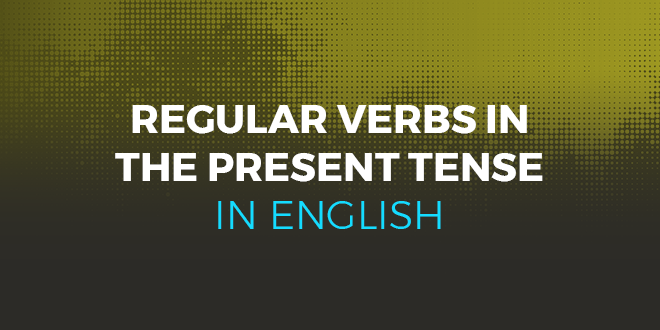 Regular verbs in the present tense in English

Regular verbs in the present tense

Thankfully in English, the regular verbs in the present tense don’t have a lot of crazy conjugation rules like in some other languages. The main thing to remember in the present tense is that the third person singular (he, she and it) takes an additional “-s” on the infinitive stem when conjugating.

This is the main point that must be memorised for common present tense verbs unless they already end in “-ss”, where the third person singular would then take “-es” instead.

What about the past simple?

Unlike the present tense in English, the past simple has a lot more irregular verbs and the problem is, the majority of them are the most common verbs.

I play = I played

You play = You Played

We play = We played

They play = They played

Pronunciation in the past tense is a different story. When “-ed” is added to verbs in infinitive that end in “-t” or “-d”, then it is pronounced. If it does not end with “-t” or “-d”then it is usually pronounced like a “-t” sound. Bear in mind that there are always exceptions.

Do you need help with verbs? Let @abaenglish teach you the rules!

What’s the next step?

It is recommendable that you memorise these verb rules to begin with and then slowly but surely focus on the irregulars learning a couple at a time. Remember not to put too much pressure on yourself to learn too much at once.

Sign up to the course
Download the app!
english present Regular verbs 2016-09-26
Share
Previous 3 British meals which are missed when abroad
Next Why online teachers are important