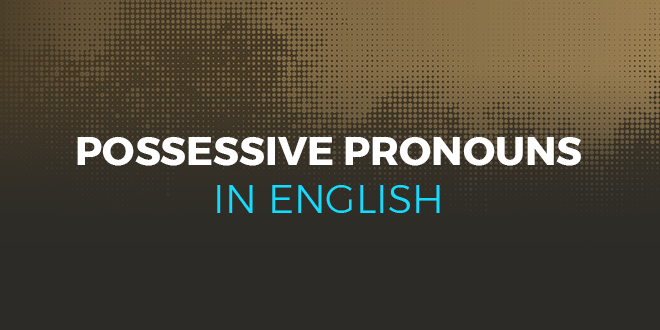 In grammar, pronouns are, as the term suggests, those words which replace the noun. They are used when we do not want to repeat the name of someone mentioned previously, or when the subject who we are referring to is apparent from the context.

@abaenglish shows you how to use possessive pronouns in English.

There are many different types of pronouns: personal, possessive, reflexive, demonstrative, indefinite, interrogative, and relative. The type of English pronoun that might cause the most confusion for a non-native speaker is the possessive. In this article we will explain why.

The main reason why you must pay attention when studying possessive pronouns in English lies in their specific features and the differences that exist between possessive pronouns and adjectives. What is the difference between an adjective and a pronoun? As you probably know, while the adjective goes next to the noun, the pronoun replaces it. Therefore, in order to speak properly, you first need to know this distinction. The table below shows the adjectives and their corresponding pronouns in English.

Use of Possessive Pronouns

In English, a possessive pronoun is used in the following cases:

-To replace a name.

Your skirt is long. Mine is short.

-After the preposition “of.”

Elizabeth is a friend of mine.

-The gender-neutral pronoun its is used with the word own.

This house is beautiful and has a garden of its own.

We washed my clothes and yours as well.

Your daughter and mine are in the same class.

Your son and mine are close friends.

When using possessive pronouns, there are some frequent mistakes that are made. Knowing them will help you avoid them. Here they are:

You should not use an apostrophe with the “s” of the pronoun.

Are these plates your’s?

Are these plates yours?

Every house has a garden of it’s own.

Every house has a garden of its own.

Unlike in some other languages, you should not use a definite article before a pronoun.

Your car is there. This is the mine.

Your car is there. This is mine.

Adjectives and pronouns can be easily confused. Remember to add the –s to the pronoun.

My jacket is blue. Your is white.

My jacket is blue. Yours is white.

When an indefinite article is followed by a possessive adjective, in English you must use the construction of + the possessive pronoun.

This is a my friend.

This is a friend of mine.

Possessive pronouns are constant, meaning that the singular and plural forms are the same.

These are your shoes. Those are mines.

These are your shoes. Those are mine.

In English, possessive pronouns have the same gender and number as the possessor, not as the object of possession.

I was with my brother, Louise was with his.

I was with my brother, Louise was with hers.

Having a good knowledge of pronouns will help you to avoid the most common mistakes and express yourself better. English grammar is crucial if you want to speak English correctly. Have you ever tried ABA English’s video classes? We offer 144 video classes about grammar as well as many exercises that will allow you to learn English in your free time without too much effort. What are you waiting for? Try our video classes today!