On Monday we announced that ABA English can now be found in German, and today’s lesson also comes from Germany: it’s all about two adorable little polar bears that live in the Munich zoo.

Are you ready to practice your listening skills?

Roughly three weeks ago two polar bear cubs were introduced to the public at the Tierpark Hellabrunn Zoo in Munich, Germany.

Crowds were thrilled for their arrival but have been waiting anxiously to learn the names of the twin ivory bundles of fur. The wait is finally over. The female cub is now Nela (Nelluh) and the male is Nobby. But it wasn’t the staff at the zoo who chose those names. Instead selection of the bears’ monikers was done in an unusual way explains Zookeeper, Helmut Kern.

– How did we come up with these names? We didn’t. We have godparents, one for each bear which we are happy about. They have adopted them so they thought about names and they decided in the end what the two would be named. 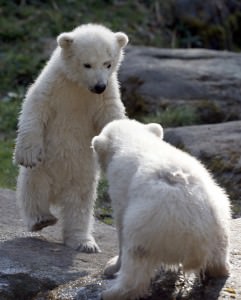 Roughly – not exactly but close in number, quality, meaning, etc.

Anxiously – afraid or nervous especially about what may happen, feeling anxiety.

Bundles – a group of things that are together or are associated with each other in some way.

Fur – the hairy coat of an animal especially when it is soft and thick.

Staff – a group of people who work for an organization or business.

Monikers – a name or nickname.

Resides – to live in a particular place.

2014-04-08
Share
Previous ABA English in German!
Next Advanced Grammar – Compound Words with ‘No’