Learn English with the News: “Joey the War Horse”

It’s time to find out what is going on in the world AND learn some English with the news.

You know what you have to do!

The London Eye hosts an unusual visitor – horse puppet “Joey” who is the star of the West End production, “War Horse”.

The play is celebrating its 2,000th performance. Since its premiere at the National Theater in October 2007, War Horse has been seen by over two million people in London and 4.6 million worldwide.

The World War One tale is about a boy and his beloved horse, who is sold to the cavalry. The boy is too young to enlist but sets off on a perilous journey to bring his horse home.

The National Theater will release 130,000 new tickets on January 27th. 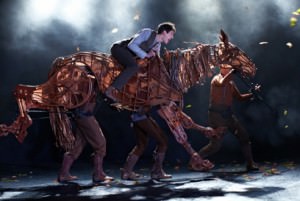 Puppet – a doll that is moved by putting your hand inside it or by pulling strings or wires that are attached to it.

Play – a piece of writing that tells a story through the actions and words of characters and that is performed on a stage.

Performance – an activity (such as singing a song or acting in a play) that a person or group does to entertain an audience.

Cavalry – the part of an army that in the past had soldiers who rode horses and that now has soldiers who ride in vehicles or helicopters.