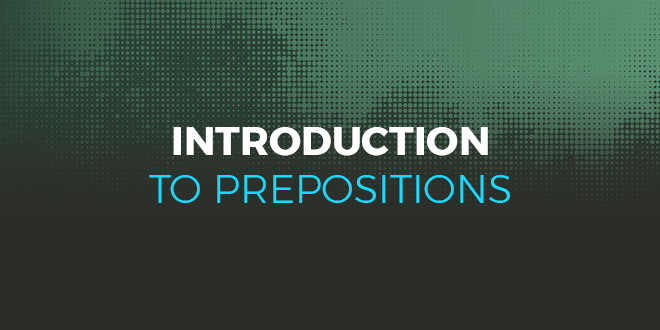 Grammar for Beginners – Introduction to Prepositions

Prepositions work with other words in prepositional phrases. Learn about them with @ABAEnglish

Prepositions are hard for most students. Why? Because there are hardly any rules as to when to use which preposition. The only way to learn prepositions is looking them up in a dictionary, reading a lot in English and memorizing useful phrases. 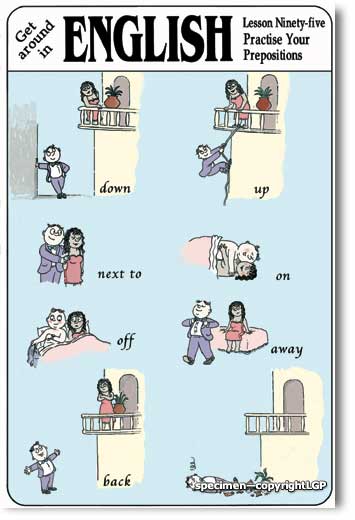 Prepositions That Express Time And Place

The following are a few examples of using in, at, and on to show time and place:

• In a specific period of time
Example: “She will be in Rome in a few days (seconds, months, etc.)”

• In a specific period of the day
Example: We are going to the park in the afternoon (morning, evening exception: at night)”

• On a specific day
Example: “The party is on Saturday, on your birthday”

• At a specific time or specific period of time
Example: “We will eat at 3:00 at noon (at night at dawn at lunch)”

• In a location surrounded by something else
Example: ” I live in the state of Nevada (in the livingroom in my apartment in the closet in the tub in downtown New York)”

• At a specified location
Example: “Let’s meet at my house (at the store at the corner of Main St.)”

• On a surface
Example: “The poem is on page 32 (on Broadway on street level on the third floor)”
Exceptions: in the attic or in the basement.

There are many expressions in English which include prepositions. This is a list of a few you may often use when writing:

ability in – different from – involved with [someone]

accustomed to – familiar with – made of

afraid of – famous for – married to

angry with or at – frightened by – opposed to

authority on – happy with – patient with

aware of – in charge of – proud of

based on – independent of – reason for

capable of – in favor of – related to

certain of – influence on or over – suspicious of

dependent on – involved in [something] – tired of

Verb phrases are two-word or three-word verbs that combine with prepositions to deliver their meaning. In some verb phrases the verb and the preposition should not be separated by other words: Look at the sky (not Look the sky at).

However, there are verb phrases where the verb and preposition can be separated: I threw away the trash is as correct as I threw the trash away. The following is a list of common verb phrases. The ones that cannot be separated are marked with an asterisk(*).

ask out – get along with* – look into

break down – get back – look out for

bring about – get off* – look over

fill out – leave out – speak with*

fill up – look after* – throw away

find out – look around – throw out

Many of these verb phrases are informal and are used more in speaking than in writing.

If you want to continue learning about prepositions and improving your English at an astronomical rate, then sign up for ABA English’s free trial today. What are you waiting for?