You can find all this information, plus speaking, writing, vocabulary exercises and more on the ABA English Course Unit 82 -Boys.

Well, with the superlatives, the endings are different.

The superlative form of one-syllable adjectives normally ends in “-est”.

And before superlatives, we use the definite article “the”.

Linda is 28 and her best friend, Clair, is 29. Claire is the oldest and Linda is the youngest.

Yesterday I saw the fattest cat in the world: it was the size of a small dog!

Hilary is the funniest sister.

Ok, with two-syllable adjectives not ending in “-y” and with longer adjectives of three syllables or more, we use the adverb “most”.

expensive – the most expensive

Note that, in contrast, when we want to express the idea of “not so much”, we use “the least”. “The least” is the opposite of “the most”.

Mandarins are the least expensive fruit in winter.

This puzzle is the most challenging I have ever done.

The following adjectives are very common and, unfortunately, have irregular comparative and superlative forms. We recommend you try to memorize these, since you will be using them a lot!

Comparative – further than (farther than)

Superlative – the furthest (the farthest)

Well done! You just revised the grammar from Unit 82! 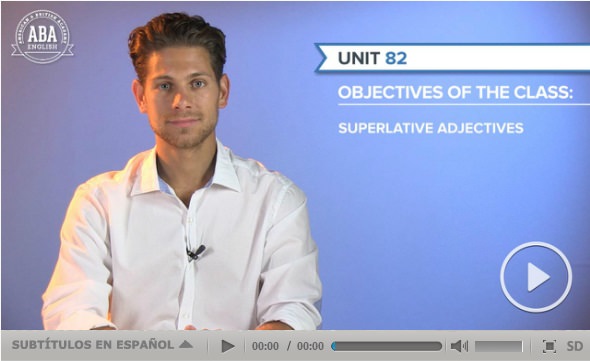 In Unit 82 -Boys, you will meet Valerie and Tanya. Find out their very different taste in boys!

I WANT TO START TODAY
Now I know what superlative adjectives are and how to use them. @abaenglish