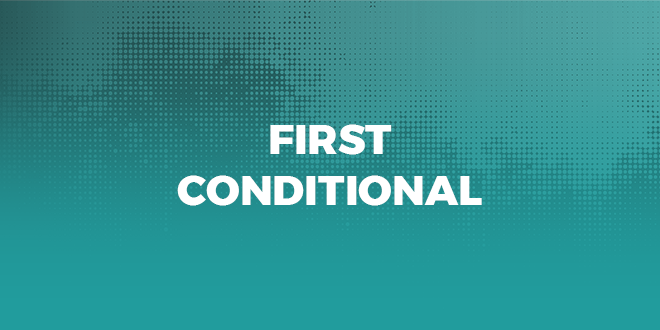 If you have come to this article, you are probably looking to expand or improve your knowledge of grammar. In reality, this is a great idea because in many cases, learning English grammar is essential to be able to express yourself properly.

Learn everything you need to know about the English first conditional with @abaenglish.

One grammar topic that is challenging for English learners is definitely the conditional. In essence, conditional sentences in English serve to describe the outcome of something that could have happened in the past or could happen in the future. In this article, we will explain the structure and uses of the first conditional.

The Structure of the First Conditional in English

One of the first things to learn is how to use the first conditional in English. It is used to talk about things that could happen in the future. While we cannot predict the future, we can imagine how things could turn out.

The first conditional in English is formed with the present simple after “if” while the second clause uses the future simple.

The affirmative structure is:

If + present simple, will + verb (in infinitive).

The negative structure is:

The interrogative structure is:

Interrogative + will + verb (in infinitive) + if + present simple?

Check out these examples of the English first conditional, in affirmative, negative, and interrogative:

If I go to bed late, I will get up very late.

If I do not go to bed late, I will get up early.

What will you do if you go to bed late?

The Differences Between the First, Second and Third Conditional

For example, a sentence in the first conditional would be:

If Henry works harder, he will pay off his debts sooner.

That is to say, it seems possible for him to work harder and that this will allow him to pay his debts more quickly.

On the other hand, the second conditional sentence would be:

If Henry worked harder, he would pay off his debts sooner.

This sentence implies that he will not work harder and, therefore, it is very unlikely that he will pay off his debts more quickly.

The third conditional is used to talk about a situation that did not happen in the past and imagines the result of that imaginary situation.

Keeping the same example as above, an example of a third conditional would be:

If Henry had worked harder, he would have paid off his debts sooner.

By this, we mean that Henry did not work hard in the past and so he did not pay off his debts quickly.

If you want to do some practice exercises for English conditional sentences, especially the first conditional, here are some ideas.

Knowing the grammatical structure is very important. For that reason, do not hesitate to do exercises that help you learn the grammar rules for the first conditional. Fill in the blank exercises are a very effective way to practice this skill.

Another way of doing practice exercises for the first conditional and the other conditionals is to make comparative sentences or to convert sentences from one conditional to another. It is important that you pay attention to the verb tenses as well as to the differences in meaning.

Finally, it is important to be creative and use your imagination to propose different types of situations when using the conditional and if in English. This will also ensure that you have fun while you learn.

Each English grammar topic has its own challenges, but they are not difficult to master if you are consistent and have a method of study that gives results according to your learning style. If you want quick and obvious results in your English proficiency, why not consider the online course from ABA English? This course offers 144 free video classes and the same number of short films that will allow you to learn grammar and communication skills from the first day.