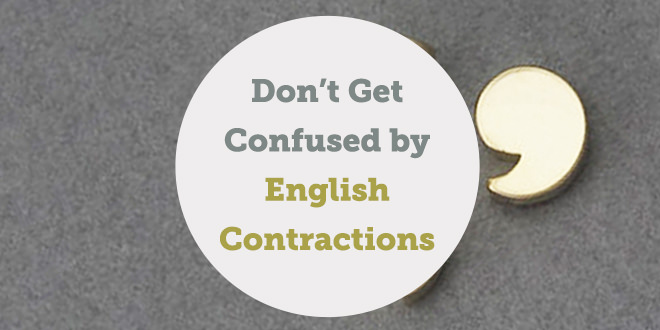 How to use contractions in English

Contractions may be confusing to non-native English speakers but with a little practice you can learn how to use them correctly.

The verb “to contract” means “to squeeze together” in English.
Bearing that in mind is a good idea as contractions are words that are made shorter or squeezed together by omitting letters and adding an apostrophe in order to make them shorter.

Some common examples are:

Contractions are commonly used in informal speech and writing only, in order to give the speech or writing a more friendly tone.
It’s not a good idea to use them when writing a formal text of any sort or making a formal speech.

Look at the dialogue below and try practising it by yourself or with a friend.

A – You’re coming to the party tonight, right?

B – Yes, of course I’m coming. I’ve been looking forward to it all week. Lina’s coming too. She’s bringing her sister who’s visiting from Paris.

B – They weren’t too keen on coming at first but I convinced them it’d be great.

A – Excellent, the more the merrier! I’ll call you later to arrange a time to pick you up.

B – OK, but you shouldn’t pick me up too late as I have to work tomorrow and need to be home early.

Let’s take a look at some more examples of contractions in the conversation:

They’re, their and there

Commonly confused words are the contraction they’re, and the words their and there.

It is the contracted form of “they are” and shouldn’t be confused with the words above.

They’re so grateful for the presents.

I’m happy that they’re coming to the party.

It is a possessive adjective and is used to indicate that something belongs to someone else.

That is their house on the corner.

Do they both have their passports on them?

It is used to indicate the position or place of something.

I’m going to France next week. I’ve already been there twice this year.

Where are the children? Oh, there they are!

It’s and its are two other commonly confused words.

It’s is the contracted form of it is (first example) or it has (second example).

It’s really cold today, but I don’t think it’s going to rain though.

Its is a possessive pronoun. It is used to modify a noun.

The dog played with its ball all morning.

Nothing can take its place.

@abaenglish and its blog – it’s so easy to find grammar explanations!