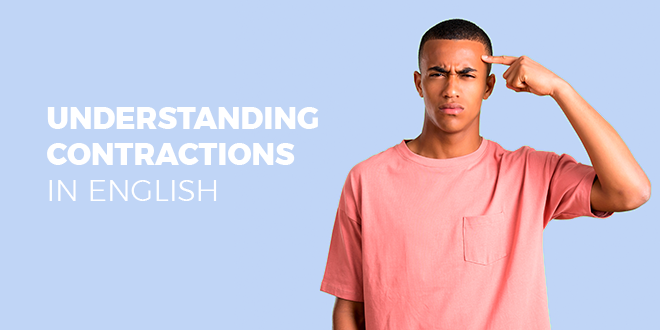 How to Use Contractions in English

In English, contractions are very common in informal language. This is the union of two words, usually a noun or a pronoun with a verb, where the disappearance of one or more letters is indicated by the use of the apostrophe.

Use English contractions correctly with @abaenglish.

I can’t believe you didn’t pass the exam.

She isn’t well this morning.

I wouldn’t go if I were you.

There’s a nice beach around this area.

She’s my mother in law.

I’ll go by myself.

They’ll visit us this weekend.

We’d love to come to Spain with you.

The verb to have can be contracted both when acting as an auxiliary and when it is simply performing the function of a verb.

Mary asked me why you’ve not come.

We know Judy and Mark. They’re our classmates.

This pizza is not tasty. You’re absolutely right!

Some forms of contractions can be confused with homophones (which have the same sound). Below, we will give you some examples to help you avoid mistakes.

My coat is dirty, its collar has a spot.

If you have doubts about which form to use, try replacing the word with it is or with it has. If the sentence makes sense, then the correct form is it’s. Do the same with the words you will find below, making sure you always replace one word with another of the same grammatical category, for example, verb with verb, adverb with adverb, pronoun with pronoun.

Your skirt is really nice.

Whose shoes are these?

They’re, their, or there?

They’re very close to each other.

Their car is new.

There’s a bike in the garden.

Your car is over there.

Now that you know the contractions in English, you will no longer have problems with the apostrophe and will know how to write informally. If there are other aspects of English grammar that you would like to know better or if you want to improve your conversation skills in English, why not try our online course? We offer 144 free video classes and the same number of short films to help you learn to speak English in a natural and grammatically correct way. Why not start right now?

Yes, I want to try the course!
Yes, I want to download the app!
2018-11-12
Share
Previous Phrases to order takeaway in English
Next Test quiz