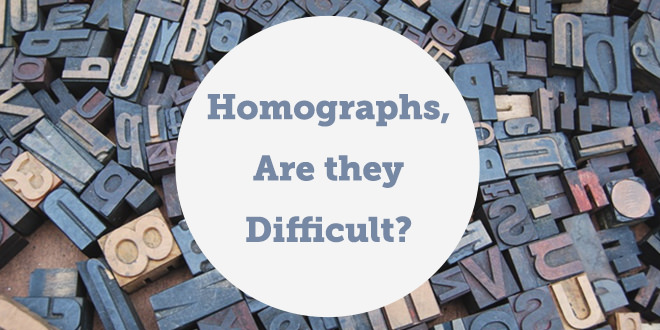 Homographs- are they really difficult?

Have you ever heard a word in English in one place in one context and understood it and then heard the same word in a different context and it didn’t make sense? It could be that this word was a homograph. In today’s post we are going to explain what a homograph is and look at different examples of the most common ones you might come across.

What is a homograph?

In English, homographs are words which have the same spelling and pronunciation but have different meanings. For non-native English speakers, this can often be confusing because if one context is understood, they might not realise that there is another context in which the word can be used.

Is there a trick to learning homographs?

In terms of learning homographs, there is not a set rule that we use to learn them. In fact, sometimes one word and spelling can have up to three different meanings. In addition to this, when you hear/learn a new word in English in a certain context, it is not apparent that the word has more than one meaning.

One of the best recommendable ways to learn homographs is to memorise a couple, perhaps the most common ones, and then just learn the rest as you come across them.

These examples are just the tip of the iceberg as there are many more in the English language for you to discover and learn.

As a student, just take your time with learning the homographs and learn them at your own pace. Forcing yourself to know as many as you can in a short period of time is not beneficial. If you would like more information or handy hints on homographs, you can sign up for free to ABA English and get more help.

Have a good day!

@abaenglish can help you practise homographs. Check out our course!