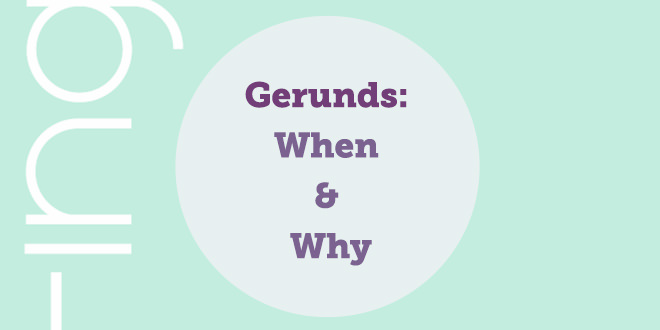 Gerunds- When and Why?

In English, one of the most common problems and often quite a tricky one for foreign language speakers learning English, is the use of the gerund.
There are many rules which can be attributed to the gerund and it can sometimes seem overwhelming. Today, we are going to look at some of the main rules we need to bear in mind when deciding to use the gerund or infinitive.

Is it necessary to use gerunds after prepositions?

After prepositions in English, it is important to remember that the proceeding verb will always be in gerund form.

Do we put gerunds after phrasal verbs?

Phrasal verbs are verbs which are composed of a verb followed by a preposition to create a new verb and are usually followed by a gerund.

It is worth noting that there are some phrasal verbs which are also followed by the preposition “to”, which is not part of the phrasal verb itself and must also be followed by a gerund.
In other words, if after “to” you can place the pronoun “it” to make a coherent sentence, then you can also place a gerund here in place of “it”.

As mentioned at the beginning, this is one of the most difficult tasks for foreign language speakers learning English. Unfortunately, there is no clear cut solution to memorising every gerund eventuality, however if you memorise and put the previously explained rules in place, you’ll be off to a flying start when it comes to working out whether it’s a gerund or an infinitive that’s needed.

Sign up for free and check out Unit 110 of the ABA course for more help and handy hints on gerunds.

Struggling with gerunds in English? @abaenglish can point you in the right direction