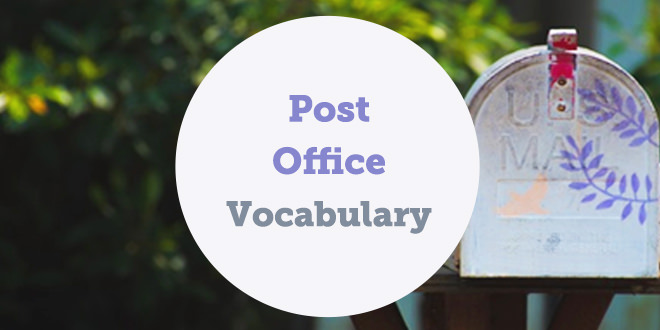 An old woman took a package to the post office to mail and was told it would cost $3.95 for fast delivery or $2.30 for slower service.

“There is no hurry,” she told the clerk, “just so the package is delivered in my lifetime.”

The joke is funny as in the States, and most other countries, the postal system is known for being very slow.

Letter – a written or printed message to someone often sent by post.

Envelope – the rectangular paper cover in which you send a letter or card to someone by post.

Stamp – a small piece of paper that you buy and then stick to an envelope or package to pay for the cost of postage.

Parcel – a box that is usually given, sent, or delivered to a person. British people tend to refer to parcels whereas Americans refer to packages.

Scales – a device that is used for weighing people or things.

Express (adjective) – delivered faster than usual for a higher price.

Delivery – the act of bringing something to a person or place. A delivery of something is the goods that are delivered.

Freight – goods that are transported by lorries, trains, ships or aeroplanes.

Junk mail – advertisements and other publicity that you receive through the post or by email which you have not asked for and which you do not want.

Mail – the system used for sending letters and packages from one person to another. In the UK, it is more common to say post. You can also refer to letters and parcels which are delivered to you as mail.

Overseas – in or to a foreign country that is usually across a sea or ocean.

Post office – a building where the mail for a local area is sent and received.

Postcard – a card on which a message may be sent by mail without an envelope and that often has a picture on one side. People tend to send postcards to their friends and family when they are on holiday.

Postmark – a mark placed over the stamp on a piece of mail that shows when the mail was sent and where it was sent from and that makes it impossible to use the stamp again.

Postmaster – a man who is in charge of a post office.

Returned – sent back to the sender or the post office.

To seal – to close (an envelope, bag, etc.) by sticking or pressing two of its parts together.

Recorded delivery – If you send a letter or parcel recorded delivery, you send it using a postal service which gives you an official record of the fact that it has been posted and delivered. In the US people say registered mail.

Zip code (American English) – a short sequence of letters and numbers at the end of your address which helps the post office to sort out the mail. In the UK people use the word postcode instead.

Woman – Good morning. I’d like an envelope and a stamp, please.

Woman – First class. How much will it cost to send this letter to Brazil first class?

Clerk – Please put the envelope on the scales.

(The clerk weighs the letter)

Woman – Thanks. Here you go.

(She gives him the money)

Clerk – It will arrive in two to three days. Please could you add the post code? Otherwise it might be returned.

Clerk – Ok then. Have a great day!

Going to the post office? Learn how to express yourself! @abaenglish