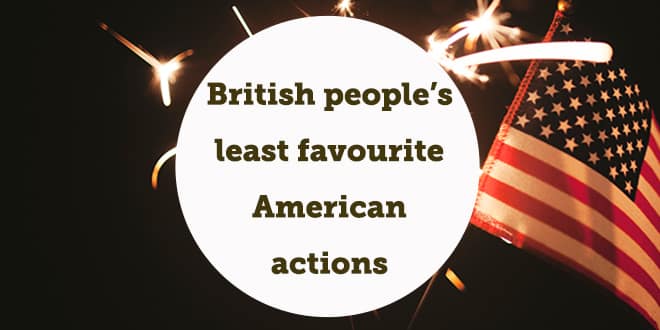 We may all share the same mother tongue and generally get each other, but there are some things that both sides will just not understand about the other. Today we’re going to look at actions that Americans deem normal, but that make the Brits’ skin crawl! Yikes!

In no particular order of annoyance…

It’s not a secret that in the United Kingdom there is a big pub and going out socialising culture that doesn’t really exist in the United States but that’s not to say that people can’t know that buying rounds is, well, common sense almost.

In the United Kingdom, people are so used to the idea of “I’ll get this round, you get the next”. In fact, it goes without saying that we do rounds- It’s in British people’s genes. Americans on the other hand don’t really do rounds, or if they have been brought into a round, feel the need to advise you that they will buy you a drink back. RELAX, people don’t automatically expect you to owe them a drink just because they bought you one. It’s more just… common courtesy although they definitely DO expect you to get the next round and will not be happy if you’re “only having the one”

British people hate to be put under pressure, especially when it comes to enjoying a nice meal out with family or friends, so you can imagine British people’s disdain when they are in a restaurant in America as the waitress is taking people’s empty plates away while others are still eating. This would absolutely NOT happen in the United Kingdom.

We all know that Americans in general aren’t shy (without generalising), which also goes for them when they are talking about money. Even among friends in the United Kingdom, talking about money makes people feel uncomfortable, therefore you can imagine a British person’s discomfort when an American or even any other random British person at a party starts talking about how much money they have. It’s the absolute highest level of cringe!

British people are known for generally being quite kind and polite as far as it could be expected, however British people believe that American people’s over enthusiastic and empty sounding“have a nice day!” expressions when leaving shops after you have bought something is about as sincere and genuine as trying to sell Christmas as a good idea to turkeys.

Finally, British people like a good old moan about things but generally only after the moment or incident has passed. They would never dare dream of complaining about a bad meal or service and would more likely rather die than do so. Americans on the other hand have no problem making their discontent known in the moment in the middle of a restaurant in front of everyone. This is enough to make a British person go into hiding for the foreseeable future. Well, it’s either that or die of embarrassment on the spot.

What else is useful to know…

These are just some of the habits that American people have that are a far cry from the British way of life. Just remember, that if you’re rich, at an expensive restaurant in the UK and unhappy with your meal, wait until all of the plates are taken away and politely pay your bill before complaining to your friends once you leave the restaurant.

Tell @abaenglish if you have experienced any of these