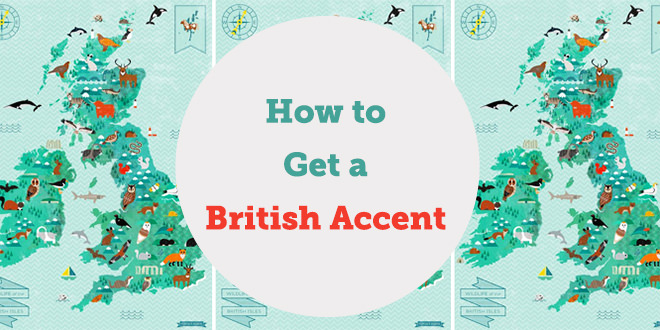 You know, trying to finally choose an accent in English and stick to it is one of the most difficult things you can do. It’s probably something people are concerned about the most.

“How can I sound like a native British or American speaker?” This is a question a lot of people ask. When you sound native or pretty close to it, it’s just a case of tweaking or perfecting your vocabulary and grammar and a presto! You speak perfect English.

While it sounds easier than it is, we have some tips that that may help you along the way to make it easier for you to practise speaking more like a Brit!

Let’s check them out!

Firstly, when a person says “British accent” often we may get confused, as the British accent on it’s own doesn’t exist; remember that Britain consists of England, Wales, Scotland and Northern Ireland, all of which have distinct English speaking accents. Even within England itself, someone from Liverpool will sound very different from someone from London, for example.

In saying that, the typical standard British accent or rather something closer to the “Queen’s English,” is what we will look at and practice today!

The focus is mostly on pronunciation.

While in American English the “u” is often pronounced as oo, in British English it is pronounced more as ew with an emphasis on the last letter.

Try to practice a few:

In the standard British accent it is uncommon to pronounce the final “r” of most words, rather it is left open at the end. Some examples would be:

And finally, the T’s

“T’s” are very under-pronounced in American English and often even take sound of the letter “d” like “wadder”-water. If you want to really impress a British English speaker it would be a  good idea to always pronounce your “t’s” properly both at the beginning, middle and end of a word.

Try practise some of these with the open ending but a pronounced “T”.

Here is an informative short video to give you some extra tips:

British #English accents, here’s how to master them! @abaenglish

2015-11-30
Share
Previous How to use contractions in English
Next Can I Use a TOEFL CBT Book to Study for the TOEFL iBT?