Banjo the Koala is returned to his home in Australia

It’s Friday and we thought we’d share with you the adventures of Banjo, an Australian koala kidnapped from a zoo in Sydney.

Here is the text from the video below, so you can follow the news reporter explaining what happened to Banjo:

“A kidnapped koala has been reunited with its keepers at a central coast wildlife park. Their worst fear was that Banjo wouldn’t surive, but it seems a guilty conscience got the better of his captors.

After almost two days away from home, freedom must have felt good for Banjo back in the familiar hands of his keeper.

He’s certainly not going anywhere. An anonymous call this afternoon told staff at the Australian Reptile Park their 13 year old had been returned, they found him dumped in the carpark.

– Just good to have him back. People can’t care for this sort of thing; it’s not a dog.

At first look it appeared he was unharmed but staff wasted no time taking him in for a check up and giving him vital supplements to bulk up for the winter months.

Banjo is just getting used to his new surroundings after travelling down from Queensland to be part of a breeding program.  Staff were stunned to learn yesterday morning that someone had stolen their prized senior koala, believed to be the first theft of its kind from an Australian zoo.

– Sometime between 8pm and 7:30 in the morning the gate was cut and Banjo was taken.

The staff say they don’t believe there is demand on the black market for smuggled koalas and are at a loss as to why anyone would want to take him. “

What do you think of Banjo’s adventure? Would you like a pet koala? 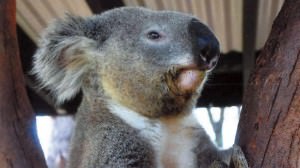 Kidnapped – (verb) to take away (someone) by force usually in order to keep the person as a prisoner and demand money for returning the person.
Keepers – (noun) a person whose job is to guard or take care of something or someone.
Wildlife – (noun) animals living in nature : wild animals.
Fear – (noun) an unpleasant emotion caused by being aware of danger : a feeling of being afraid.
Guilty – (adjective) responsible for committing a crime or doing something bad or wrong.
Conscience – (noun) the part of the mind that makes you aware of your actions as being either morally right or wrong.
Captors – (noun) someone who has captured a person and is keeping that person as a prisoner.
Mate – (noun) a way of referring to a friend.
Buddy – (noun)  a close friend — used especially to describe men or boys who are friends.
Dumped – (verb)  to put (something) somewhere in a quick and careless way.
Unharmed – (adjective) not harmed, not hurt.
Bulk up – (verb) to cause (someone) to gain weight
Surroundings – (noun) the places, conditions, or objects that are around you.
Breeding – (noun) the process by which young animals, birds, etc., are produced by their parents.
Stunned – (verb) to surprise or upset (someone) very much.
Theft – (noun) the act or crime of stealing.
Smuggled – (verb) to move (someone or something) from one place to another illegally and secretly.

2011-07-18
Share
Previous Spelling vs. Pronunciation
Next Where There is a Will, There is a Way