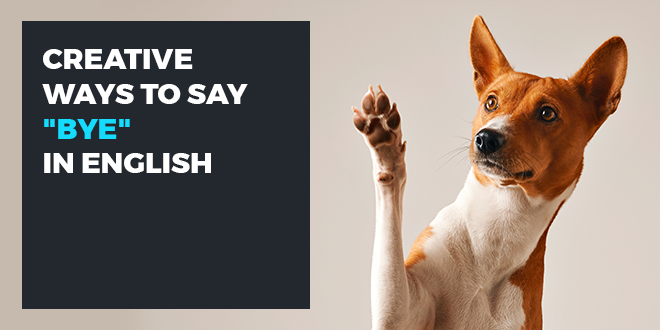 Farewells have very ancient origins and deep meanings. Just think of a farewell like “adieu” where the mention of divinity (it literally means “to God”) suggests its religious origins and its sacred connotation. In fact, the farewell was originally nothing more than a blessing addressed to the person you were taking leave from. Its first mention goes back to ancient Babylon in a private document that mentioned the farewell, “May Shamash and Marduk allow you to live again.” Even the ancient Hebrew greeting “Shalom” (peace) and the Arabic “Salām alaik” (peace be upon you) offer blessings and good wishes.

What can we say about English? Have you ever wondered what goodbye means? At first glance, it may seem like a word composed of good and bye, but, in reality, it is an abbreviated form of the expression “God be with you.”

Ancient history helps us to understand how deeply rooted the need to say goodbye to others is in us as well as the need to leave a good impression, to express a desire and, in some cases, the hope of seeing each other again. Every country in the world, though, has different customs and greetings. To increase your repertoire of greetings in English, today we will present some ways to say farewell in English, ranging from the most formal to the most colloquial.

This greeting is one of the least widespread and is also among the most formal. It is generally used when one thinks that they will not see the other person again.

This is a very formal greeting that has practically fallen into disuse. It is composed of the verb fare (to happen) and well (good). Therefore, it represents a desire for good things to happen. As in the case of goodbye, it is used only in cases where it is believed that you will not meet again. However, it has a more romantic and archaic tone than goodbye.

Have a good day

Literally meaning what it says, this a pretty formal farewell and, along with the corresponding expressions have a nice evening, have a good night, have a nice day, it is appropriate to take leave of someone you do not know well. In fact, we can adapt this formula to the situation by wishing someone a good holiday, a good weekend, etc.

Less formal than the previous example, this means “take care of yourself” and is used when we think that we will not see the person we are speaking to for some time.

It was nice seeing you

Just as we say “Nice to see you” when we come across someone we know, we can use this form of farewell to reiterate the pleasure of seeing someone. If, on the other hand, we have just met someone for the first time, we could say “It was nice meeting you.”

This is the most popular and common farewell. It is quite informal but can be addressed to people we know as well as to those we are meeting for the first time or accidentally.

Usually, this farewell is used when addressing children. If it is exchanged between adults, it may sound childish or malicious.

Meaning what it says, this farewell is suitable for any type of relationship between speakers.

Use this farewell if you know exactly when you will see your interlocutor, for example, “Until Saturday,” “Until next month,” etc.

This farewell, short for “until later,” is quite informal. It is mainly used by teenagers when they say goodbye and is often followed by other slang expressions.

This is the informal variation of “See you later” and should be used only by those who know each other well.

This very informal farewell indicates that you are happy to go. That is why you must use it with care. If it is your last day of work before the holidays, you can use this to say goodbye to those colleagues who are still working.

This is the most informal farewell of all. It is probably an adaptation of the French “à tout à l’heure”. It was originally very popular among gangsters and is a farewell between men.

First appearing in Britain in the early 1900s, this is very informal and derives from the British word cheers (thank you).

These are the most common examples of saying goodbye to someone in English and can give you an idea of how rich and varied English is. If you do not want to limit yourself to simply communication but also want to express yourself appropriately and with awareness of the many nuances of the language, why not try our online course? We put 144 free video classes at your disposal with the same number of short films so that you can learn the English necessary for daily communication.

OK, I want to see a video class!
OK, I’m going to download the app!
2019-02-27
Share
Previous 5 tips to organise your English studies
Next Storytelling and the Learning of the English Language