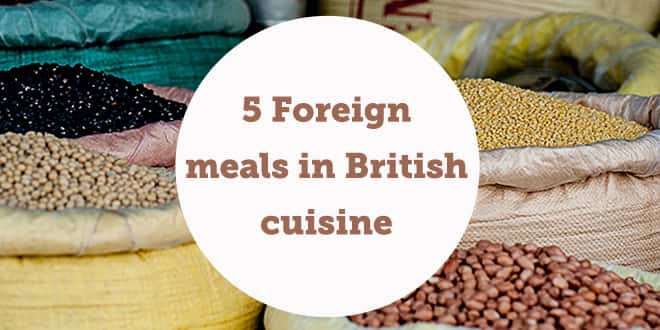 For years, us Brits have gone all over Europe and even to the Caribbean and Mexico on our happy holidays and along the way have tried some incredible and some *cough* not incredible *cough* food. Don’t even get me started on the drinks! We LOVE mixers and cocktails when we go abroad to combat the heat; so refreshing! Nowadays, what most foreign tourists who come to our shores here in the United Kingdom will notice is the international variety and popularity of our menus. Today we are going to have a look at the most popular foreign foods on our own menus.

We could not imagine life without Spaghetti Bolognese (Or as us Brits call it, “Spag Bol”)! As if the idea of pasta with a regular sauce weren’t good enough, you decided to go and invent a rich bolognese sauce to accompany the spaghetti taking the game to the next level. Bravo Italia, Bravo!

We couldn’t leave the Italian meals behind without mentioning pizza as that would have been a travesty! It wouldn’t be surprising if everyone in the United Kingdom said that pizza were their favourite food because it’s AMAZING! Italy- we owe you big style!

France you absolutely surpassed yourself with your soft cheeses this time! Yes, us Brits do love our mature cheddar but we are very partial here and there to a cracker with brie or camembert which have a place on every cheeseboard! Christmas cheese boards just would not be complete without them! Talking about cheese makes a joke spring to mind;

What cheese do you use to convince a bear to move? Camembert… Yes, I know… It’s not the best

We owe India a lot for their amazing recipes and showing us how to create the perfect chicken madras or tikka masala but I think it’s got to the stage where us Brits have made them even better than they have ever been. You have never had a proper night out at the pub followed by a local club where you know EVERYONE and I mean EVERYONE unless you got a curry from the local takeaway to munch on your way home. If you never got that curry, you’ll have to do it all over again until mission=completed.

ANDA ANDA TEQUILA! Okay, perhaps British people’s Spanish isn’t quite up to scratch but let it be known that our love for Mexican food has never strayed! Well, only to all of the other cuisines that we love as well but we love you all equally!

Fajitas though! You guys literally won the race! So simple, yet effective and tasty as! What made you guys think to combine everything like that? Either way, it works and we love it! No matter where you go in the UK, every town without exception has a restaurant which sells their own take on fajitas (apologies in advance to any Mexicans who think that evolving them and putting our own spin on them was a bad idea). Know that we are forever indebted to you for this glorious recipe!

What is everyone’s favourite foreign food?

Wow, that’s pretty much the toughest question in the world! No matter who you ask in the UK, everyone’s favourite will probably vary but something which is popular all round I think is pizza. If someone tells you they don’t like pizza, can you really trust them?