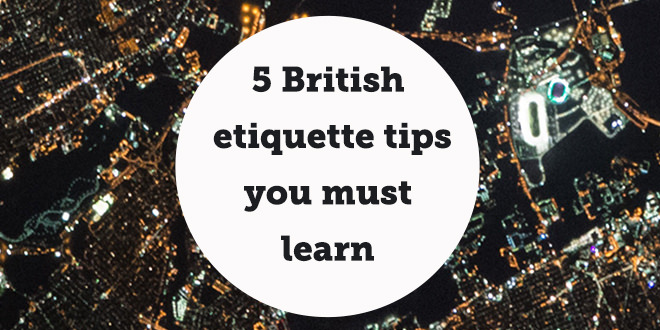 5 British Etiquette Tips You Must Learn!

British people, what can I say? Well, they have a reputation for being particularly polite as far as the stereotype goes. What are they really like though? The answer- generally very polite. Due to their politeness however, it is important to remember that they enjoy a good bit of etiquette. Today we’re going to be looking at 5 different etiquette tips you MUST know before you go to the United Kingdom!

We know that British people are very polite, often to the point that they may not sound genuine, so when a British person tells you “come and see me at my house whenever”, they don’t literally mean whenever. In fact, showing up unannounced at someone’s house in the United Kingdom without prior warning can almost be classed as rude. This may seem very strange, especially if they told you to do it but remember- not everybody means what they say.

There’s nothing more annoying to British people than meeting someone who doesn’t arrive on time. If you have agreed to meet a British friend of yours at a specific time at a specific place, please do them the honour of being there on time because we guarantee to be. This may seem like something minuscule and unimportant however, British people take being on time very seriously. Make sure you are very punctual.

As we’ve mentioned, British people love to be polite so it’s important that you are too when you go to the United Kingdom. It is very much the norm that if someone bumps into you by accident that they will say sorry, except, you also say sorry (even though it wasn’t your fault). Many may find this strange because the idea of apologising for something that you haven’t done is strange but that’s just the way the Brits roll. In other words, remember to apologise for everything in the UK. You’ll see people apologising to you constantly too.

Avoid talking about any controversial subjects in the United Kingdom-especially if you are in new company and don’t know people very well yet. Why is this an issue you might be wondering? Well, due to the fact that there are many differing opinions on various delicate issues, people can become quite uncomfortable expressing their opinions in public so it is best to leave taboo topics such as religion, football teams and politics out of conversations with people that you have just met.

Finally something that is VERY important to remember is the issue of Queuing. Forming an orderly queue is almost like a religion to British people! If you even contemplate thinking about skipping a queue to get attended to quicker, people will have no qualms about singling you out so that everyone knows. Not only would this be embarrassing but it means that you would likely have to go all the way to the back of the queue to start your wait again which does not sound like fun.

After all that, British etiquette appears to be somewhat difficult but trust us, once you get into the swing of things, you’ll get the hang of it in no time!

Have a jolly good time fitting into British society!

@abaenglish can teach you British etiquette